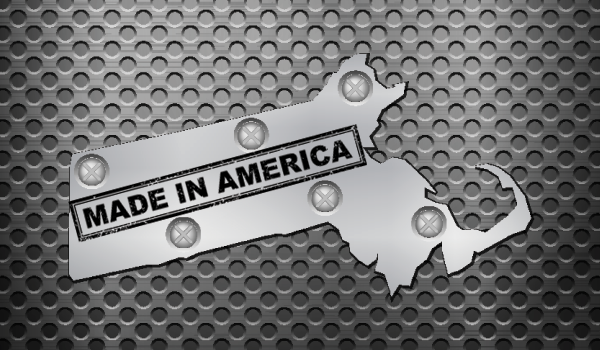 “Boston is a logical location for a company seeking to marry manufacturing with advanced technology,” stated General Electric Chairman and CEO Jeff Immelt, who went on to say, “Massachusetts spends more on research and development than any other region in the world, and [Boston] attracts a diverse, technologically-fluent workforce focused on solving challenges for the world.”

Mr. Immelt’s statement came at the announcement of GE’s decision to locate their headquarters in Boston. It also came on the heels of a $600 million public-private partnership to promote photonics manufacturing in the U.S., a partnership involving Massachusetts Institute of Technology, the State University of New York Polytechnic Institute (SUNY Poly), and Worcester, Massachusetts’ Quinsigamond College.

Massachusetts has long been at the forefront of high-tech manufacturing, technology, and innovation and it is not a surprise that the state has become a driving force in the reshoring movement. Both of these new developments are examples of how industry, technology, innovation, and government can work together to grow the movement, strengthen the U.S. economy, and grow American jobs.

The GE-Boston Decision: An Ideal Collaboration

Associated Industries of Massachusetts (AIM) President and Chief Executive Officer Richard C. Lord, explains this ideal collaboration of industry, technology, and government by saying: “GE’s move brings a host of benefits to the Massachusetts economy, from top-level jobs to innovation to an unmatched global market presence. AIM and its 4,500 member employers congratulate the Baker [MA governor] and Walsh [Boston mayor] administrations for recognizing that taxes, work force, and other elements of the business climate really matter in corporate location decisions.”

GE already has a significant presence in Massachusetts, with nearly 5,000 employees across the state in businesses including Aviation, Oil & Gas and Energy Management. In 2014, GE moved its Life Sciences headquarters to Marlborough, MA and in 2015 GE announced its energy services start-up, Current, would also be headquartered in Boston. (Source: AIM)

Bloomberg recently named Massachusetts the most innovative state in the nation. The state is known for a culture that is welcoming, with a diversity of talent, thought, and background that attracts the best, brightest, and most skilled to its work force.

The move did not come without state and city government incentives. Massachusetts officials disclosed the state offered up to $120 million in grants for infrastructure improvements. Boston offered up to $25 million in property tax relief. Incentives include state and city government help in building a public helipad and secure space for the company's corporate aircraft at local airports.

Other companies may well decide to locate in Massachusetts. Mr. Lord said that the state is likely to approach full employment this year, its employers added almost 68,000 jobs during the first 11 months of 2015, economic output grew 25 percent faster than the nation as a whole, per-capita personal income remains the second highest in the U.S, and Massachusetts posted a record-breaking year for venture capital funding in 2015, with $7.4 billion invested across 531 deals.

This cutting-edge partnership will establish the nation’s first American Integrated Institute for Manufacturing Integrated Photonics (AIM). It came about as the result of the National Network for Manufacturing Innovation competition run by the federal government and is the sixth of nine new institutes dedicated to different types of manufacturing.

According to MIT News, federal funding of $110 million will be combined with some $500 million from AIM Photonics’ consortium of state and local governments, manufacturing firms, universities, community colleges, and nonprofit organizations across the country.

The Institute will be physically headquartered in New York state and led by the State University of New York Polytechnic Institute (SUNY Poly). AIM Photonics will bring government, industry, and academia together to advance domestic capabilities in integrated photonic technology and better position the U.S. relative to global competition.

According to WGBH News, MIT will lead the application of photonics tech in cutting-edge sectors like robotics and health care, while Worcester’s [MA] Quinsigamond College will take the lead on practical training to get middle-skill workers into photonics jobs.

Lionel Kimerling, the Thomas Lord Professor in Materials Science and Engineering at MIT, says, “the integration of photonics with electronics promises not only to boost the performance of systems in data centers and high-performance computing, but also to reduce their energy consumption—which already accounts for more than two percent of all electricity use in the U.S.”

Mr. Kimerling goes on to say, “Europe is ahead in industry coordination right now, following a decade of government investment. This new U.S. initiative is one of the first of this kind in the U.S., and the bet is that the innovation and research here, combined with the manufacturing capability, will allow our [U.S.] companies to really take off.”

Key Ingredients and a Recipe for Success

These two examples are proof of what many experts have stated with regard to what is necessary to bring manufacturing back to U.S. shores and build a strong economy. Indeed, we have quoted from some of those experts and from our own experience in previous blogs.

In a nutshell, onshoring provides a plethora of resources and collaborative opportunities that simply are not available offshore:

Kudos to Massachusetts for being a leader in the "Made in America” movement!